Interesting Facts About the Use and Origin of Sirens

We all know about the loud sirens on an ambulance rushing by. This device lets out a penetrating sound, warning anyone nearby (or far). A siren includes speakers, tone generators capable of generating different tones to be used for specific instances and an control box that gives the first responder easy to use control in a fast moving vehicle.

To most people the sound of an ambulance doesn’t sound nice and can be deafening, especially for people living in bigger cities. But how do paramedics feel about sirens? They are exposed to the loud noise more than anyone else after all. According to interviews, paramedics are used to the nasty looks people give them when they turn their siren on, like their eardrum is going go hurt. The loud sound is actually not much quieter inside the car. Some ambulances even make use the rumbling siren sound known as “the Howler” which is especially harmful. The button on this feature states “wear hearing protection when you use this”. Paramedics are however mostly in a hurry and don’t have always have time to put in hearing protection. 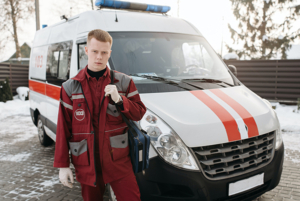 Just before 1799 the siren was invented by the Scottish natural philosopher John Robinson, which lead up to a large variety of different powered sirens. The oldest sirens were musical instruments that produced musical tones by rapid interruption of a current of air, steam, or fluid on a perforated rotating disk. Did you know where the word ‘siren’ came from? In 1891 an improved siren was capable of producing loud noises even under water. It was this feature that inspired the name based on sirens from Greek mythology.

Before the use of sirens, emergency vehicles used bells to alert the public. It was in the 1970’s that emergency vehicles started using sirens. But before that, sirens were also used during war time to alert soldiers and citizens alike of any appending danger. To increase the volume of the sound generated by sirens, a horn was fitted to the device that turned the high pitch from the siren into a low frequency loud noise that could be heard much further. 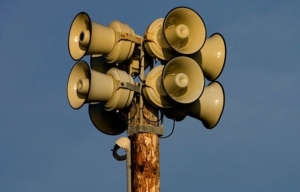 Modern sirens used by paramedics have come a long way. The tones of the sirens, combined with the emergency lighting systems make an immediate impact warning or alert the public.
A study in 1998 showed the difference the use of lights and siren could make. The average time for an ambulance to get to their destination would be 11 minutes 6 seconds and 14 minutes 56 seconds without lights and siren. That is a difference of 3 minutes and 50 seconds! Out of the 75 tested cases, 4 people would have benefited from this increase in transportation time. 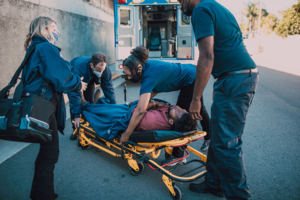 Our revived, second hand ambulances all have functioning sirens that are well checked.
You can find the ambulances that we have for sale here: